How to Prevent the Conveyor Belt from Appearing Along the Lines? 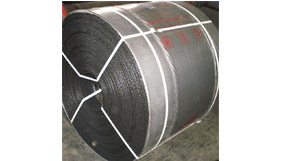 There are four reasonable countermeasures to prevent the conveyor belt from causing the following lines:

1. The frame characteristics of textiles are the root of the characteristics of decision-making belts. At this stage, the weft shrinkage and stretch of NN and EP textiles used for belts are too large, which is the direct cause of the weave. Reducing the zonal extension, that is, raising the belt characteristics is an important way to control costs.

2. Narrowing the core during the strip forming process can prevent the formation of the parallel grain.

Third, the relevant elements that cause the transformation of the along the grain cannot be ignored.

Fourth, the heat shrinkable film of textiles is not caused by the appearance of the line, it is only the general characteristics of chemical fiber textiles.

When the belt conveyor is in the original factory, the conveyor belt has undergone debugging and adjustment, and it is generally not easy to encounter the problem of deviation in direction in application. However, due to various reasons, the deviation of the conveyor belt direction is also a common problem in the application. Here is a brief analysis of its causes and removal methods:

1. The conveyor belt is stretched and must be tightened.

2. The two sides of the conveyor belt are not tightened and are not leveled, and must be calibrated again. Note that when calibrating, only start the light-emitting conveyor belt and immediately observe the actual effect of the adjustment, to avoid the belt side being squeezed on the sound card rack, destroying the belt edge and the belt jam. If it is really stuck, you have to loosen all the tightening and pull the manual service to the middle part.

3. The conveyor belt must be disassembled and replaced if it does not loosen or fall off the card. Equipment, this kind of sporadic spare parts are presented completely free for life.

4. The side support frame of the V-shaped buffer roller is moved by accidental collision and must be calibrated again. If a belt conveyor with a support frame is used, there is no such thing, but the support frame cannot adjust the deviation of the conveyor belt.

5. The sound card rack is subject to severe impact and deformation. This common fault is not easy to occur, once it occurs, the overall conveyor belt must be adjusted again.

6. The conveyor belt is seriously damaged and must be replaced.

Our company also has PVC Conveyor Belt on sale, welcome to contact us.