What is the Proper Way to Use Conveyor Belts in Industrial Production?

As a Fabric Conveyor Belt Manufacturer, share with you.

1. Prevent the buffer rollers from being covered by raw materials, resulting in insensitive rotation, avoid overflowing from being stuck between the drum and the tape, pay attention to the lubrication of part of the theme activities of the conveyor belt, but do not grease the conveyor belt;

3. If the conveyor belt deviates from the direction, effective corrections should be taken immediately;

4. When part of the conveyor belt is found to be damaged, use artificial cotton cloth to repair it immediately to prevent expansion;

5. Prevent the conveyor belt from being obstructed by the sound card frame, support or small pieces of raw materials, and avoid scratching. 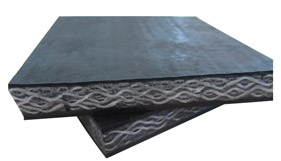 3. Heat: Increasing temperature can cause catalytic cracking or thermochemical cross-linking of vulcanized rubber. But the basic function of heat is still active. Increasing the oxygen diffusion rate and active redox reaction, and then accelerating the redox reaction rate of vulcanized rubber, it is a common phenomenon of aging-thermal oxygen aging.

Our company also has Conveyor Belts on sale, welcome to contact us.